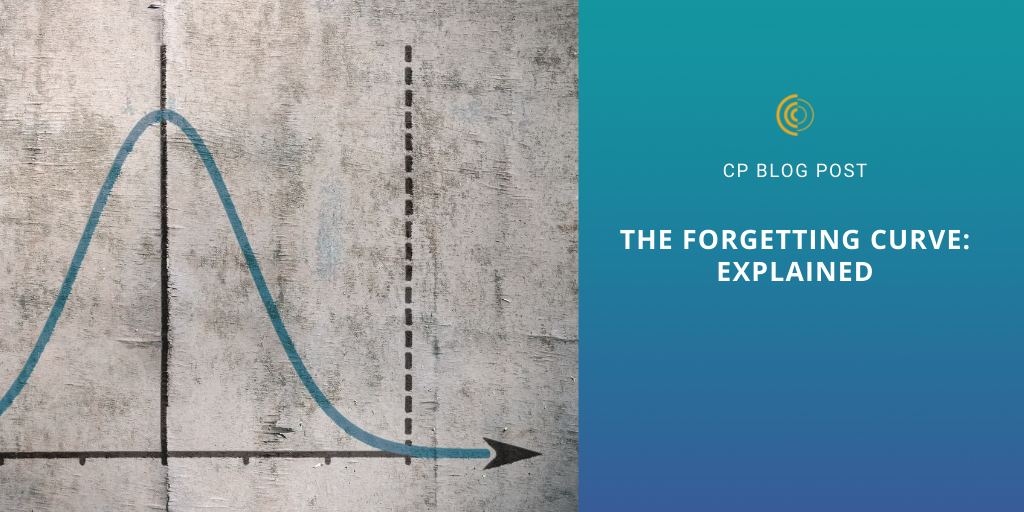 Think back to when you were in school. You stayed up all night cramming for an assessment, only to forget all the information you worked so hard to retain a few days later.

Forgetting so quickly sometimes stems from poor study practices. When you cram before a quiz, you use your short-term memory. If you study more judiciously for days and weeks in advance, you’ll retain the material for longer. But, without intervention, even long-term memory eventually fades.

In psychology, this is known as the forgetting curve. Understanding this phenomenon is crucial to crafting memorable e-learning courseware. Here’s what you need to know.

What Is the Forgetting Curve?

In simple terms, the forgetting curve is the process by which learned material degrades over time.

Typically, this is represented by a graph with “% retained” on the y axis and “time elapsed” on the x axis. In the case of our cramming example, the curve is rather steep. For long-term memory, it’s flatter.

Of course, it’s not always a perfect curve.

In school, you typically take a few quizzes before you get to a test. You can think of the test as a few quizzes put together. As you prepare for this larger assessment, past quizzes often make up a big chunk of your study material.

Review is a fundamental component of solidifying long-term memories. Once you’ve learned a new bit of information, you need to reengage with it periodically before it’s committed it to long-term memory.

Use it or Lose It

Learned material won’t remain in your mind forever. If you don’t use it, you’ll lose it.

At some point in your education, you probably had to memorize all the state capitals. This is a rite of passage for 4th graders across the country. But how long did you retain this knowledge for? If you’re like most Americans, not very.

Frankly, knowing all 50 state capitals isn’t very useful. It doesn’t come up too often. Without reviewing this information, your brain filed it promptly away in the “worth forgetting” pile.

Who Discovered the Forgetting Curve?

Psychologists have known about the forgetting curve for nearly 150 years. It was first “discovered” by German psychologist Hermann Ebbinghaus in 1885. You can read his hypothesis here.

To come up with this theory, he performed a study on himself. He assembled 2,300 nonsense syllables—a vowel between two consonants (e.g. ‘mik,’ ‘foj,’ ‘kaf,’ and so forth).

Then, he pulled several of these at a time to form a sequence, and tried to memorize them in order. When he could recall the rest of the sequence from the first syllable, he considered it learned.

He then examined how a few variables impacted his ability to recall a sequence. These included:

Ebbinghaus wasn’t the first to suggest that memory fades as time passes. That much is obvious. His groundbreaking contribution to the field was attempting to document this process, and considering the variables that impact knowledge retention.

How to Beat the Forgetting Curve

Ebbinghaus posed the problem of the forgetting curve—not the solution. But don’t worry. Over a century has passed since then, and psychologists and educators now have a deeper understanding of how to enforce learning.

It’s not just our understanding that has changed, but technology, too. Now that we understand how people learn, we’ve developed learning management systems to help them along in that journey.

An LMS makes it easy to overcome the forgetting curve. Here’s how:

Earlier, we mentioned that review is the key to beating the forgetting curve. Review is essentially what Ebbinghaus referred to as “repetition.”

The idea behind this is simple. Often, encountering a new bit of information one time isn’t enough to commit it to memory—not for very long, anyway.

So what are you supposed to do, then? Review everything you’ve learned, as often as you can? This would be incredibly time-consuming, and could lead to burn-out fast.

Enter spaced repetition. The goal is to gradually increase the interval between reviews. Eventually, the material becomes so familiar that you can go months—even years—without reviewing it.

As you craft your LMS courseware, keep this concept in mind. If left to their own direction, your learners might review material on their own. But you can help them out by weaving spaced repetition organically into the curriculum.

Together with spaced repetition, microlearning is one of the best ways to combat the forgetting curve.

Let’s face it: reviews aren’t the most enjoyable part of the learning process. Our lives are busy enough as it is. How can you find the time and motivation to go over old material?

But what if it didn’t take so much time? That’s where microlearning comes in.

In case you aren’t familiar, microlearning is simply breaking learning materials down into smaller, more digestible chunks. In your LMS, this could take the form of short (less than 10-minute) videos infographics, or brief quizzes.

Microlearning takes the intimidation out of the review process. When your learners don’t have to devote significant chunks of time to reviewing, it doesn’t feel like such an obstacle to overcome.

Then there are the added benefits of microlearning on its own—whether used for review purposes or not. Put simply, micro material is more memorable. You’ll see boosts not only in retention, but engagement too.

The right combination of spaced repetition and microlearning will help you overcome the forgetting curve. But it isn’t everything. You’ll need a learning management system to house all your educational materials.

The perpetual online learning platform will keep all of your materials engaging, accessible, and memorable. Even if your education strategy isn’t all virtual, an LMS can be what ultimately helps you beat the forgetting curve.

What’s the perfect LMS for you? That depends on your educational goals. But here are some marks of quality you should always look for, in any online learning platform:

If all this sounds appealing, our LMS offers these features and more. Elevate can be the tool that helps your learners beat the forgetting curve. If you’d like to learn more, get in touch with Meghan Gowen at meghan.gowen@gocadmium.com.